The winning compassionately/fight/flight response is an upgrade to the psychology fight/flight response. During our day at work we want better results by consistent performance improvement. When working with teams and during this election year I observe the need for people to work as a team. On a great team each person has a voice for the betterment of the team and to better themself. 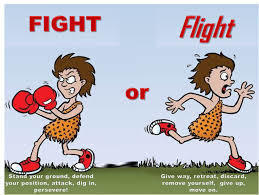 However, I’ve seen some team members implement their fight response when they have someone expressing a viewpoint unique from theirs. They communicate their position as does the other person. However, with a not so good team one or both implement their flight response if they don’t hear what they want to hear. They create a sub team because they think the other person is wasting their time and they don’t include their teammate who has a unique viewpoint.

Why? Because they implement their flight response. To them, it’s easier to flee (flight) then have a mature conversation without someone exploding or getting ticked off. Instead of doing so, add a new mental construct called the winning compassionately response.

The winning compassionately response keeps each team member involved and engaged. If done good, it creates better results and teammates learn by seeking to know their teammates to better understand themself. Then, in current and future situations your team and you perform better. It’s a better habit for you and your team to implement. The rewards are enormous. Most notably, you have a more enjoyable and fun workplace (environment), less stress, and your team and you achieve more.

During the presidential political campaign in the The United States of America you hear candidates talk about we need to fight this or that. Implementing their fight/flight response. Instead, how about using the new mental construct, winning compassionately response, for vanguard leadership making America and the world experience winning compassionately by showing the rise of humanity (good prevails over evil).

Continuous maturing, development, and growth brings more peace and prosperity for everyone. There would be a whole lot more progress, achievements, and successes worth talking about than what exists now.